I saw these on an ad and immediately blew them off. Yeah yeah another relatively inexpensive way to curl your hair heat free blah blah. “They won’t work on your thick ass hair, Rosie, so don’t bother.” I forgot about them until I saw an ad again and then I couldn’t stop thinking about them. I had to have these damn rollers! How perfect would they be to take on my trip for fab holiday hair without the hassle of a voltage converter for my curling iron?! I HAD TO HAVE THESE ROLLERS!!!

I was like a woman possessed. At first I didn’t even know what they were called but thanks to Google and some weird search words I came up with the Magic Circle Hair Styling Roller Curlers. The only thing was I couldn’t see was where they were being stocked. I spent a weekend running around to all the hair care shops around my neighbourhood to find them. Each place looking at me weird and not knowing what I was talking about. I thought I had been beaten and that I would never find them and then I remembered the fabulous online store called eBay and found them instantly and not only that they were only $4.29 for an 18 piece set. YES!!

They arrived in a little plastic package with no instructions, which was a little frustrating but for $4.29 what did I expect? Thankfully there were loads of tutorials on YouTube like this:

They then sat around in my room for a few weeks just waiting to be used, because I was a little hesitant as I knew I had to sleep with them in for best results. How the hell was I going to sleep comfortably with them in? Finally this last weekend I put my big girl pants on and braved the sleepless night ahead to test them out. 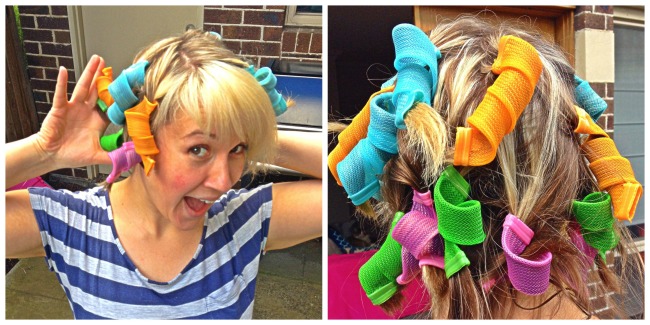 I washed and semi dried my hair after applying some mousse and then started by parting my hair in two, into top and bottom sections (longer curlers for the top section and the shorter ones for the bottom, naturally). The first thing I noticed was that they weren’t so easy to pop in with wet hair as opposed to the trial run I did on my dry hair. After a few curse words and throwing them across the bathroom and stomping like a little bitch I calmed the fuck down and started again, taking my time. Luckily enough these were an OK length for my hair but if I had anything longer I would have had to double up and there weren’t enough rollers to start with. I made do with the 18 but I think if I had 6-8 more I would have had better coverage.

After the predicted night of interrupted sleep (every time I turned around I had to reposition them so they weren’t stabbing me in the face or head. How the hell did ladies do this back in the day?) I took them out, worried I’d end up looking like Shirley Temple, but they worked out perfectly. Big, bouncy curls that weren’t too tight and perm-like. After some tweaking and pinning I was really happy with the result.

So after all that I’m not sure if I’ll be using them again, let alone taking them with me on my trip. Yes they worked, but only after I’d had them in for 12 hours and had an uncomfortable nights sleep as well, so they’re hardly “magical”. It’s so much easier and quicker to whip out my curling iron and taking the 20-30 minutes to style my hair rather than the half a day these took. For $4.29 I’m not overly devastated about it. Plus they will come in handy if I ever decide to go on a camping trip where there isn’t any electricity but I want to look fabulous *ahem, as if that’ll ever happen* 🙂