Sunday Sessions; The Soundtrack to My Life – Def Leppard

Happy New Year dollface!! I’m still reeling that it’s a new year and even more so that I have to go back to work tomorrow BOOO!! As it’s the first Sunday of the year I wanted to introduce and welcome you to this year’s new series Sunday Sessions; The Soundtrack to My Life! Music is such a huge part of my life and I can safely say it’s like therapy for me. If I’m feeling down or upset all I need to do is pump out some great tunes (preferably at maximum volume) and my spirits soar. How do you explain why certain music just resonates within your soul and some doesn’t? Why certain songs you could have sworn were written about you yet you’ve never even caught a whiff of a songwriter in your life?!

Each Sunday I’ll be bringing you bands/groups/singers who I absolutely adore and that have shaped my life throughout the years and hopefully give you a little insight about me and possibly some new music to listen to. (When I say new, it’s new to you as most of the stuff I listen to is old!) So without further ado…

Did someone say Def Leppard?

Yep, that’s right, opening spot goes out to the lads from Sheffield (and Belfast), those fabulous English rockers Def Leppard. I can remember the first time I heard a Def Leppard song; Armageddon It. It was back in 1988 and I was watching  video clips taped off MTV that my bro’s and sis had recorded. They’d stay up Friday and Saturday nights (yep, only weekend MTV for us in Oz in the late 80s) and tape all the cool songs that were out. I was fast forwarding through some ads before I stopped on this clip. I was hooked from the get go. I don’t know what it was, perhaps a mix of loud rock, long hair, ripped denim and amazing harmonies, whatever it was I knew these guys were awesome!! For a whole year after my sister and I watched their video, Historia, pretty much every day.

Def Leppard formed in the late 70s and after a few line up changes the band has stayed the same since 1992. Amongst the 11 albums they’ve released it would be their 4th album, Hysteria, which is my favourite. It was their biggest selling and most popular, but it really is all killer no filler! Songs like Animal, Pour Some Sugar On Me and the aforementioned Armageddon It all meld together like pure rock joy. Almost 30 years later it still effing rocks! 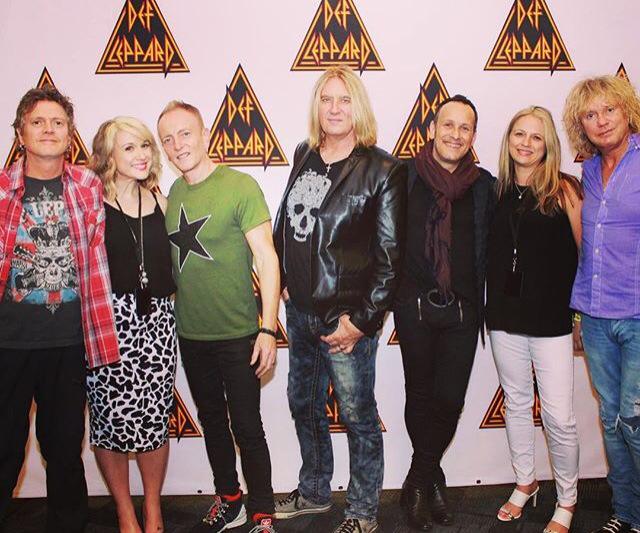 Throughout the years I’ve managed to see them live in concert a total of 10 times across 3 different countries and each time it’s like a whole new experience – one could almost call it religious! I’ve also met them a few times and they’ve always been fabulous which totally helps me love them even more.

When you love a band this much sometimes it’s hard to pinpoint your favourite songs and it does change from month to month, but without a doubt this has to be one of my faves year in and year out. This Sunday I give you Def Leppard’s Animal….